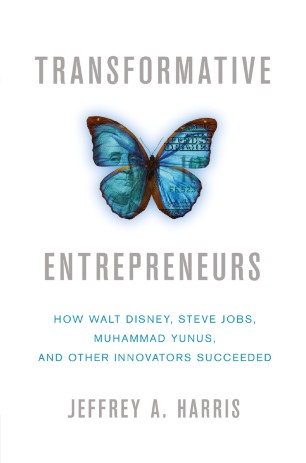 Meticulously researched with fresh insights into the entrepreneurial process, Jeffrey Harris brings the in-depth perceptions from his nearly thirty years of venture capital experience to provide a thorough understanding of the transformative ideas and leadership abilities that separate the winners and losers.

JEFFREY A. HARRIS Managing Director of Energy at Warburg Pincus, New York, USA. He is a director of Competitive Power Ventures, ElectroMagnetic GeoServices ASA, Gulf Coast Energy Resources, Knoll, Kosmos Energy, Laredo Petroleum, Osum Oil Sands, Sheridan Production Partners and Spectraseis AG. Currently he is Vice Chairman of the Board of Trustees for the Cranbrook Educational Community, and a member of the Board of Trustees of New York-Presbyterian Hospital. In addition, Mr. Harris is an adjunct professor at the Columbia University Graduate School of Business,USA,where he teaches courses on venture capital and innovation.

"If you have any interest at all about how great companies are envisioned, launched, and developed, this book is an extraordinary chronicle of how some determined individuals have produced superb results and created millions of jobs for the American economy. The story of each of the incredible entrepreneurs portrayed in the book is as dramatic as the history of America" - William H. Draper, III, author of The Startup Game

"Ideas are cheap, execution is dear. Jeff Harris' book deals with the execution side of innovation and shows us that innovation is found in all kinds of settings - from public TV children's shows to the iPhone in your pocket. Drawing from his 28-year career of funding innovation, Jeff's book is not theory but real practice. It is an appreciation of those who innovate - and it arrives just in time for an economy crying out to understand innovation and its job-creating effects." - Felda Hardymon, General Partner, Bessemer Venture Partners, MBA Class of 1975 Professor of Management Practice, Harvard Business School, & Recipient of the NVCA Lifetime Achievement Award, 2009

"What's common to the Cirque du Soleil and Playboy, CNN and Starbucks, Federal Express and the Grameen bank? An idea, yes, but then fulfillment in elaboration and execution. Jeff Harris' book is valuable because its case-by-case studies illustrate how some acorns grow into oaks. Daily discourse is filled with enough hot air about innovation to float a balloon for every man, woman, and child. Transformative Entrepreneurs is different. It is grounded and it is lucid and entirely comprehensible, honed as it is by a teacher who excites enthusiasm in his courses at Columbia Business School." - Sir Harold Evans, author of They Made America, From the Steam Engine to the Search Engine, Two Centuries of Innovators

"Jeffrey Harris provides us a magisterial tour of the entrepreneur's difficult journey. Drawing from decades of investing and observation, he illuminates the many dimensions in which a successful venture must operate. What makes this book especially helpful is the way in which it examines the experiences of well-known people and companies. Jeffrey portrays a sharp distinction between an entrepreneur and innovator, the latter has an interesting idea, but the former implements that idea through leadership, marshaling scarce resources, persuasive selling and efficient operations. He has put his finger on the key differences between the winners and losers in the entrepreneurial world." - Paul Ricci Chairman and CEO of Nuance Communications

"Transformative Entrepreneurs puts in perspective just how rare a successful entrepreneur is and how high the hurdles are to attaining the status of a 'transformative entrepreneur'. At the same time, the book shows that entrepreneurs know no geographic, ethnic , age, or sexual boundaries, so stake a claim and be a part of the entrepreneurial world!" - Mark Heesen, President, National Venture Capital Association