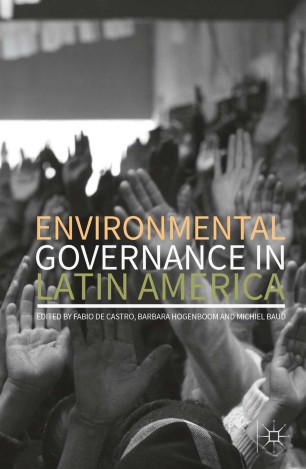 This book is open access under a CC-BY license.

The multiple purposes of nature – livelihood for communities, revenues for states, commodities for companies, and biodiversity for conservationists – have turned environmental governance in Latin America into a highly contested arena. In such a resource-rich region, unequal power relations, conflicting priorities, and trade-offs among multiple goals have led to a myriad of contrasting initiatives that are reshaping social relations and rural territories. This edited collection addresses these tensions by unpacking environmental governance as a complex process of formulating and contesting values, procedures and practices shaping the access, control and use of natural resources. Contributors from various fields address the challenges, limitations, and possibilities for a more sustainable, equal, and fair development. In this book, environmental governance is seen as an overarching concept defining the dynamic and multi-layered repertoire of society-nature interactions, where images of nature and discourses on the use of natural resources are mediated by contextual processes at multiple scales.

Fabio de Castro is Assistant Professor in Environmental Studies and Brazilian Studies at the Centre for Latin American Research and Documentation (CEDLA), University of Amsterdam, The Netherlands. His research interests include local governance of natural resources, protected areas, agrarian transformations, and biofuel expansion in Latin America.

Barbara Hogenboom is Senior Lecturer in Political Science at CEDLA. Her research interests include Latin American policies and politics of mineral extraction and natural resource use, and the influence of China's rise on the region.

Michiel Baud is Director of CEDLA. His research interests includes indigenista ideologies and their influence on present-day academic interpretations of the Andes, the role of ethnic movements in Latin American politics, the construction of collective memories in present-day Latin America and the relationship between ethnic relations and environmental ideas in 19th and 20th century Latin America.