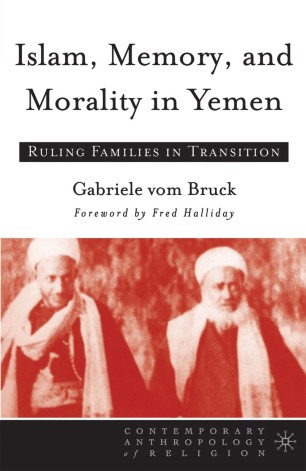 Islam, Memory, and Morality in Yemen

Islam, Memory, and Morality in Yemen tells a story of a Yemeni hereditary elite which was overthrown in the 1962 revolution in North Yemen. For over a millennium, they had enjoyed exclusive rights to the leadership of the Imamate, the religiously sanctioned state. Following the violent removal from power of King Faysal of Iraq in 1958, the overthrow of the Yemeni Imamate - the longest lasting Hashimite rule in the Middle East - confirmed the decline of Hashimite power (held by ruling generations claiming descent from the Prophet Muhammad). However, rather than concentrating on recent political history, Islam, Memory, and Morality in Yemen highlights the personal predicament of those targeted by the revolution, in which they served as the foil for the new regime's moral and political ascendancy. Focusing on the cultural politics of memory, the book explores how members of the elite remember in the process of making sense of their current lives and formulating responses to adversity.