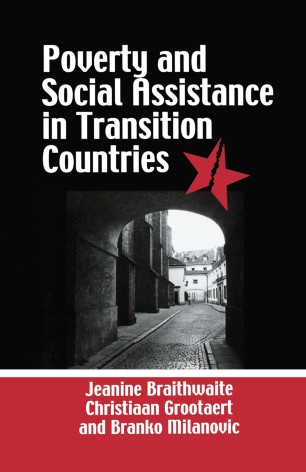 Declining incomes and growing income inequality have led to a rise in poverty in the transition economies of Eastern Europe and the former Soviet Union. This study examines poverty and social assistance in six countries - Bulgaria, Hungary, Poland, Estonia, Russia, and Kyrgyz Republic - to compare the poverty profiles and the correlates of poverty between the two regions. The study finds that the profile of poverty is more sharply defined in Eastern Europe than in the former Soviet Union, where poverty is more widespread. This holds the potential for better targeting of social assistance in Eastern Europe, and the study proposes a novel two-step approach to identify the poor.

Jeanine Braithwaite is Economist in the Europe and Central Asia Department.

Christiaan Grootaert is Senior Economist in the Social Development Department.

Branko Milanovic is Principal Economist in the Development Economics Research Group; all are at the World Bank.