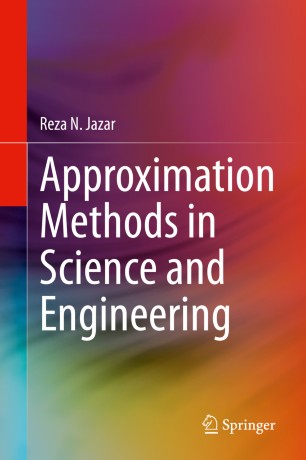 Approximation Methods in Science and Engineering

Approximation Methods in Engineering and Science covers fundamental and advanced topics in three areas: Dimensional Analysis, Continued Fractions, and Stability Analysis of the Mathieu Differential Equation. Throughout the book, a strong emphasis is given to concepts and methods used in everyday calculations. Dimensional analysis is a crucial need for every engineer and scientist to be able to do experiments on scaled models and use the results in real world applications. Knowing that most nonlinear equations have no analytic solution, the power series solution is assumed to be the first approach to derive an approximate solution. However, this book will show the advantages of continued fractions and provides a systematic method to develop better approximate solutions in continued fractions. It also shows the importance of determining stability chart of the Mathieu equation and reviews and compares several approximate methods for that. The book provides the energy-rate method to study the stability of parametric differential equations that generates much better approximate solutions.

Professor Reza Jazar received his PhD in Nonlinear Vibrations and Applied Mathematics from Sharif University of Technology in 1997. Professor Jazar has extensive experience in the automotive industry with major world car manufacturers, along with more than 20 years of experience in academia. He is an active scientist, specializing in vehicle dynamics and stability, robotics, nonlinear vibrations, and nonlinear dynamic systems. He has invented several techniques, methods, theorems, and algorithms that are currently considered as established academic or industry techniques, among them: Razi Acceleration, Energy-Rate Method, RMS Optimization Method, and Floating-Time Method. Professor Jazar has authored and co-authored more than 200 publications, including ten research books and textbooks. His textbook Vehicle Dynamics and Robotics has been adopted as a textbook by universities worldwide. Professor Jazar is also the founder and Editor in Chief of international Journal of Nonlinear Engineering.