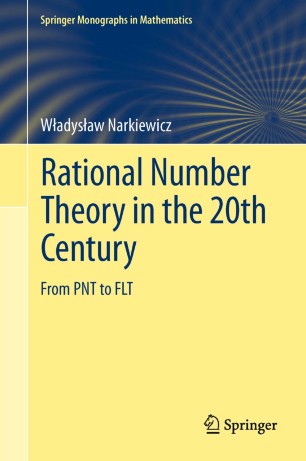 From PNT to FLT

The last one hundred years have seen many important achievements in the classical part of number theory. After the proof of the Prime Number Theorem in 1896, a quick development of analytical tools led to the invention of various new methods, like Brun's sieve method and the circle method of Hardy, Littlewood and Ramanujan. These methods were the driving force behind new advances in prime and additive number theory.  At the same time, Hecke’s resuscitation of modular forms started a whole new body of research  which culminated in the solution of Fermat’s problem.

Rational Number Theory in the 20th Century: From PNT to FLT offers a short survey of 20th century developments in classical number theory, documenting between the proof of the Prime Number Theorem and the proof of Fermat's Last Theorem. The focus lays upon the part of number theory that deals with properties of integers and rational numbers. Chapters are divided into five time periods, which are then further divided into subject areas. With the introduction of each new topic, developments are followed through to the present day.

This book will appeal to graduate researchers and students in number theory, however the presentation of main results without technicalities and proofs will make this accessible to anyone with an interest in the area. Detailed references and a vast bibliography offer an excellent starting point for readers who wish to delve into specific topics.