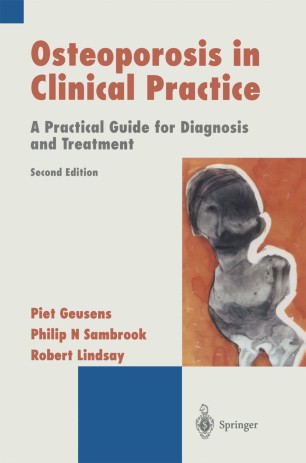 A Practical Guide for Diagnosis and Treatment

When I was a young intern in internal medicine,osteoporosis was defined mainly as a fracture occurring in elderly people. However,although plain X-ray examination was recognized as an insensitive way to detect osteoporosis, hypodense bone was already considered as the reflection of the disease. Over the past 20 years, con­ siderable progress has been accomplished. In terms of prevalence, incidence, risk factors, and the burden of osteoporosis and low-energy fracture, we can appreciate the magnitude of the problem and its impact on quality oflife. Weare wellaware that vertebral fracture, which can be acutely associated with a low clinical expression, leads to significant long-term impairments. The costs for the individual and for the health budget, Le. society,are estimated better. Wenow have a clear definition of the disease, such as low bone mass and architectural defects, resulting in increased fragility. For the former part of the definition, the clinician can use accurate and pre­ cise tools allowing them to distinguish how their patient's bone mineral content differs from that of a young healthy population in which fracture occurs very rarely. For the second series of fragility determinants, i. e. structure, methods are in rapid progress and will provide information to clinicians on these variables in the near future. Basicand clinical research have allowed major improvements in the understand­ ing of the pathophysiology of the disease. Newgenes implicated in lowand/or high bone mass have been characterized.