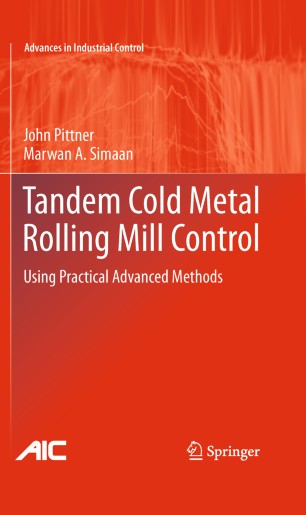 The tandem rolling of cold metal strip is a large, highly complex nonlinear multivariable process the control of which poses a significant engineering challenge. Existing controllers have proven to be susceptible to disturbances and uncertainties in process variables and attempts to increase robustness to these phenomena have had their own drawbacks so a new approach is needed. Tandem Cold Metal Rolling Mill Control deals primarily with a novel and practical advanced method for control of the tandem cold metal rolling processes based on the state-dependent Riccati equation technique which is recently emerging as a useful method for control of complex nonlinear systems. Background material is presented to assist the reader with a general control background to appreciate the significance and practical advantages of the new advanced control scheme over conventional and more recently proposed advanced techniques. A short history of tandem cold rolling is followed by descriptions of various types of cold rolling processes and a basic mathematical model of the process. The diverse conventional and advanced control methods and their advantages and disadvantages are compared, and a detailed treatment of the theoretical and practical aspects of the state-dependent algebraic Riccati equation technique given. The specific details of the new procedure are described in a manner not requiring detailed expertise in the control of tandem cold rolling. The results of simulations performed to verify the control model and overall system performance with the new controller coupled to the process model are included. Simulation results and data derived from actual operating mills are compared so as to make concrete the improvements in performance using the new method. Additionally, material is included which shows the new technique to be capable of extension to the control of a broad range of large-scale complex nonlinear processes. Engineers working with control systems in the metal processing industries will find that the advanced control ideas promulgated here will be of considerable benefit in increasing the robustness of their systems and, therefore, the quality of their products. Tandem Cold Metal Rolling Mill Control also will be useful to academics and graduate students interested in advanced automatic control and its practical application and in the uses of the state-dependent Riccati equation in particular.