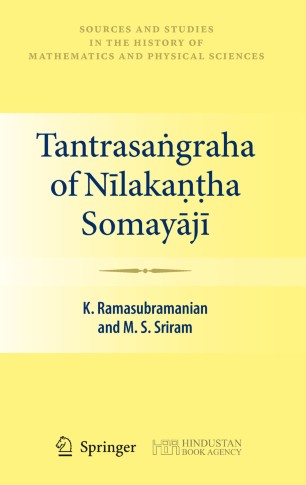 Tantrasaṅgraha, composed by the renowned Kerala astronomer Nīlakaṇtha Somayaji (c. 1444–1545 CE) ranks along with Āryabhatīya of Āryabhata and Siddhāntaśiromani of Bhāskarācārya as one of the major works that significantly influenced further work on astronomy in India. One of the distinguishing features of this text is the introduction of a major revision of the traditional planetary models which includes a unified theory of planetary latitudes and a better formulation of the equation of centre for the interior planets (Mercury and Venus) than was previously available.

Several important innovations in mathematical technique are also to be found in Tantrasaṅgraha, especially related to the computation of accurate sine tables, the use of series for evaluating the sine and cosine functions, and a systematic treatment of the problems related to the diurnal motion of the celestial objects. The spherical trigonometry relations presented in the text—applied to a variety of problems such as the computation eclipses, elevation of the moon’s cusps and so forth—are also exact.

In preparing the translation and explanatory notes, the authors have used authentic Sanskrit editions of Tantrasaṅgraha by Suranad Kunjan Pillai and K V Sarma. The text consists of eight chapters—mean londitudes, true longitues, gnomonic shadow, lunar eclipse, solar eclipse, vyatīpāta, reduction to observation and elevation of the moon’s cusps—and 432 verses. All the verses have been translated into English and are supplemented with detailed explanations including all mathematical relations, figures and tables using modern mathematical notation.

This edition of Tantrasaṅgraha will appeal to historians of astronomy as well as those who are keen to know about the actual computational procedures employed in Indian astronomy. It is a self-contained text with several appendices included, enabling the reader to comprehend the subject matter without the need for further research.