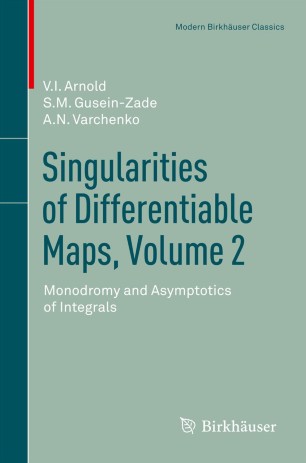 Monodromy and Asymptotics of Integrals

Originally published in the 1980s, Singularities of Differentiable Maps: Monodromy and Asymptotics of Integrals was the second of two volumes that together formed a translation of the authors' influential Russian monograph on singularity theory.  This uncorrected softcover reprint of the work brings its still-relevant content back into the literature, making it available—and affordable—to a global audience of researchers and practitioners.

​​​While the first volume of this title, subtitled Classification of Critical Points, Caustics and Wave Fronts, contained the zoology of differentiable maps—that is, was devoted to a description of what, where, and how singularities could be encountered—this second volume concentrates on elements of the anatomy and physiology of singularities of differentiable functions.  The questions considered here are about the structure of singularities and how they function.

In the first part the authors consider the topological structure of isolated critical points of holomorphic functions: vanishing cycles; distinguished bases; intersection matrices; monodromy groups; the variation operator; and their interconnections and method of calculation.  The second part is devoted to the study of the asymptotic behavior of integrals of the method of stationary phase, which is widely met within applications.  The third and last part deals with integrals evaluated over level manifolds in a neighborhood of the critical point of a holomorphic function.

This monograph is suitable for mathematicians, researchers, postgraduates, and specialists in the areas of mechanics, physics, technology, and other sciences dealing with the theory of singularities of differentiable maps.