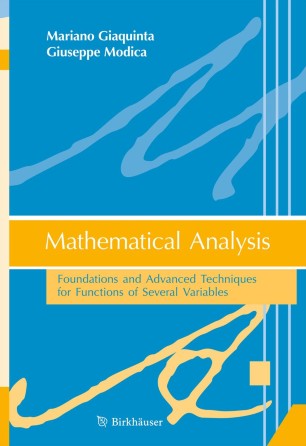 Foundations and Advanced Techniques for Functions of Several Variables

Mathematical Analysis: Foundations and Advanced Techniques for Functions of Several Variables builds upon the basic ideas and techniques of differential and integral calculus for functions of several variables, as outlined in an earlier introductory volume. The presentation is largely focused on the foundations of measure and integration theory.

The book begins with a discussion of the geometry of Hilbert spaces, convex functions and domains, and differential forms, particularly k-forms. The exposition continues with an introduction to the calculus of variations with applications to geometric optics and mechanics. The authors conclude with the study of measure and integration theory – Borel, Radon, and Hausdorff measures and the derivation of measures. An appendix highlights important mathematicians and other scientists whose contributions have made a great impact on the development of theories in analysis.

This work may be used as a supplementary text in the classroom or for self-study by advanced undergraduate and graduate students and as a valuable reference for researchers in mathematics, physics, and engineering. One of the key strengths of this presentation, along with the other four books on analysis published by the authors, is the motivation for understanding the subject through examples, observations, exercises, and illustrations.

Other books published by the authors – all of which provide the reader with a strong foundation in modern-day analysis – include:

* Mathematical Analysis: Functions of One Variable

* Mathematical Analysis: An Introduction to Functions of Several Variables

The presentation of the theory is clearly arranged, all theorems have rigorous proofs, and every chapter closes with a summing up of the results and exercises with different requirements. . . . This book is excellently suitable for students in mathematics, physics, engineering, computer science and all students of technological and scientific faculties.

—Journal of Analysis and its Applications

The exposition requires only a sound knowledge of calculus and the functions of one variable.  A key feature of this lively yet rigorous and systematic treatment is the historical accounts of ideas and methods of the subject.   Ideas in mathematics develop in cultural, historical and economical contexts, thus the authors made brief accounts of those aspects and used a large number of beautiful illustrations.