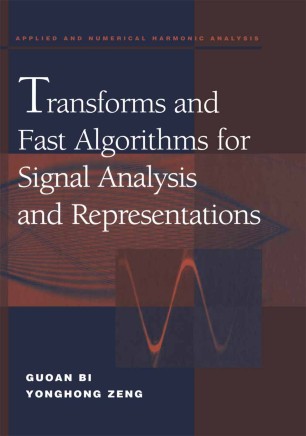 Transforms and Fast Algorithms for Signal Analysis and Representations

. . . that is what learning is. You suddenly understand something you've un­ derstood all your life, but in a new way. Various transforms have been widely used in diverse applications of science, engineering and technology. New transforms are emerging to solve many problems, which may have been left unsolved in the past, or newly created by modern science or technologies. Various meth­ ods have been continuously reported to improve the implementation of these transforms. Early developments of fast algorithms for discrete transforms have significantly stimulated the advance of digital signal processing technologies. More than 40 years after fast Fourier transform algorithms became known, several discrete transforms, including the discrete Hart­ ley transform and discrete cosine transform, were proposed and widely used for numerous applications. Although they all are related to the discrete Fourier transform, different fast algorithms and their implementations have to be separately developed to minimize compu­ tational complexity and implementation costs. In spite of the tremendous increase in the speed of computers or processors, the demands for higher processing throughout seemingly never ends. Fast algorithms have become more important than ever for modern applications to become a reality. Many new algorithms recently reported in the literature have led to important improvements upon a number of issues, which will be addressed in this book. Some discrete transforms are not suitable for signals that have time-varying frequency components. Although several approaches are available for such applications, various inher­ ent problems still remain unsolved.