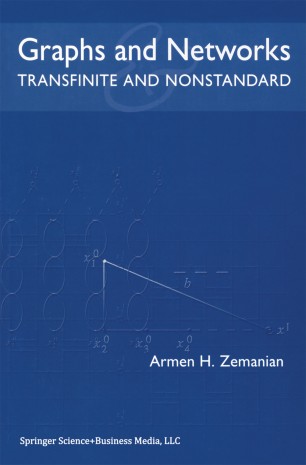 This self-contained book examines results on transfinite graphs and networks achieved through a continuing research effort during the past several years. These new results, covering the mathematical theory of electrical circuits, are different from those presented in two previously published books by the author, Transfiniteness for Graphs, Electrical Networks, and Random Walks and Pristine Transfinite Graphs and Permissive Electrical Networks.

Two initial chapters present the preliminary theory summarizing all essential ideas needed for the book and will relieve the reader from any need to consult those prior books. Subsequent chapters are devoted entirely to novel results and cover:

* Nontransitivity of path-based connectedness alleviated by replacing paths with walks, leading to a more powerful theory for transfinite graphs and networks

Graphs and Networks: Transfinite and Nonstandard will appeal to a diverse readership, including graduate students, electrical engineers, mathematicians, and physicists working on infinite electrical networks. Moreover, the growing and presently substantial number of mathematicians working in nonstandard analysis may well be attracted by the novel application of the analysis employed in the work.

"For about thirty years Zemanian has been developing a theory of infinite electrical networks. This book is the latest in a series of books...on the subject. The subject is necessarily abstract and sophisticated because infinite objects are the main objects of discourse.... The first few chapters are important not only to remind the reader of the terms, but also to give an improved or alternate treatment of some earlier results.… There does not yet seem to be a large following of researchers in this area, but it seems very attractive and ripe for investigation. It’s intriguing to see the connections between set theory and electrical network problems.... To understand these concepts fully the reader must consult the book under review. The reviewer highly recommends devoting the effort needed to understand these original and surprising concepts."   —SIAM Review