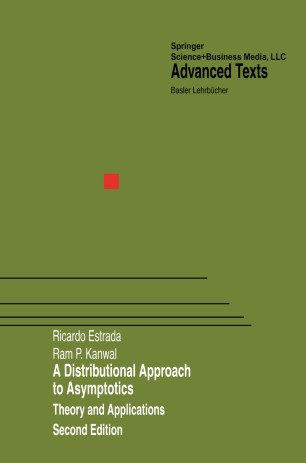 A Distributional Approach to Asymptotics

"...The authors of this remarkable book are among the very few who have faced up to the challenge of explaining what an asymptotic expansion is, and of systematizing the handling of asymptotic series. The idea of using distributions is an original one, and we recommend that you read the book...[it] should be on your bookshelf if you are at all interested in knowing what an asymptotic series is." -"The Bulletin of Mathematics Books" (Review of the 1st edition) ** "...The book is a valuable one, one that many applied mathematicians may want to buy. The authors are undeniably experts in their field...most of the material has appeared in no other book." -"SIAM News" (Review of the 1st edition) This book is a modern introduction to asymptotic analysis intended not only for mathematicians, but for physicists, engineers, and graduate students as well. Written by two of the leading experts in the field, the text provides readers with a firm grasp of mathematical theory, and at the same time demonstrates applications in areas such as differential equations, quantum mechanics, noncommutative geometry, and number theory. Key features of this significantly expanded and revised second edition: * addition of a new chapter and many new sections * wide range of topics covered, including the Ces.ro behavior of distributions and their connections to asymptotic analysis, the study of time-domain asymptotics, and the use of series of Dirac delta functions to solve boundary value problems * novel approach detailing the interplay between underlying theories of asymptotic analysis and generalized functions * extensive examples and exercises at the end of each chapter * comprehensive bibliography and index This work is an excellent tool for the classroom and an invaluable self-study resource that will stimulate application of asymptotic