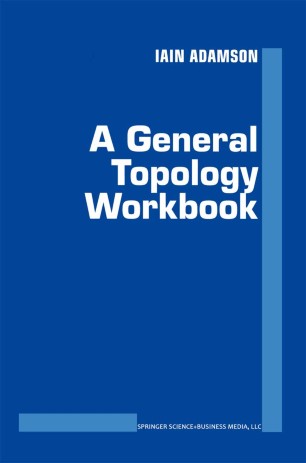 This book has been called a Workbook to make it clear from the start that it is not a conventional textbook. Conventional textbooks proceed by giving in each section or chapter first the definitions of the terms to be used, the concepts they are to work with, then some theorems involving these terms (complete with proofs) and finally some examples and exercises to test the readers' understanding of the definitions and the theorems. Readers of this book will indeed find all the conventional constituents--definitions, theorems, proofs, examples and exercises­ but not in the conventional arrangement. In the first part of the book will be found a quick review of the basic definitions of general topology interspersed with a large num­ ber of exercises, some of which are also described as theorems. (The use of the word Theorem is not intended as an indication of difficulty but of importance and usefulness. ) The exercises are deliberately not "graded"-after all the problems we meet in mathematical "real life" do not come in order of difficulty; some of them are very simple illustrative examples; others are in the nature of tutorial problems for a conven­ tional course, while others are quite difficult results. No solutions of the exercises, no proofs of the theorems are included in the first part of the book-this is a Workbook and readers are invited to try their hand at solving the problems and proving the theorems for themselves.