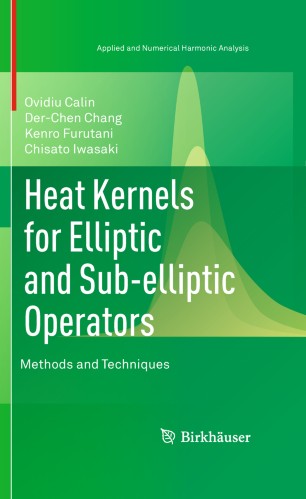 This monograph is a unified presentation of several theories of finding explicit formulas for heat kernels for both elliptic and sub-elliptic operators. These kernels are important in the theory of parabolic operators because they describe the distribution of heat on a given manifold as well as evolution phenomena and diffusion processes.

•comprehensive treatment from the point of view of distinct branches of mathematics, such as stochastic processes, differential geometry, special functions, quantum mechanics, and PDEs;

•novelty of the work is in the diverse methods used to compute heat kernels for elliptic and sub-elliptic operators;

•most of the heat kernels computable by means of elementary functions are covered in the work;

•self-contained material on stochastic processes and variational methods is included.

Heat Kernels for Elliptic and Sub-elliptic Operators is an ideal reference for graduate students, researchers in pure and applied mathematics, and theoretical physicists interested in understanding different ways of approaching evolution operators.