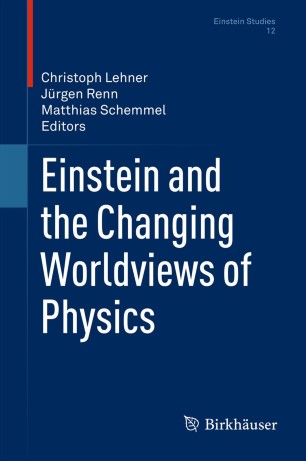 Einstein and the Changing Worldviews of Physics

This volume reviews conceptual conflicts at the foundations of physics now and in the past century.  The focus is on the conditions and consequences of Einstein’s pathbreaking achievements that sealed the decline of the classical notions of space, time, radiation, and matter, and resulted in the theory of relativity.  Particular attention is paid to the implications of conceptual conflicts for scientific views of the world at large, thus providing the basis for a comparison of the demise of the mechanical worldview at the turn of the 20th century with the challenges presented by cosmology at the turn of the 21st century.

Throughout the work, Einstein’s contributions are not seen in isolation but instead set into the wider intellectual context of dealing with the problem of gravitation in the twilight of classical physics; the investigation of the historical development is carried out with a number of epistemological questions in mind, concerning, in particular, the transformation process of knowledge associated with the changing worldviews of physics.

Einstein and the Changing Worldviews of Physics is divided into four main parts:

* Part I: At the Limits of the Classical Worldview;

* Part III: The Emergence of the Relativistic Worldview;

* Part IV: A New Worldview in the Making.

The contributions explore various aspects of the emerging relativistic views in modern physics by giving an historical, philosophical, and mathematical account of Einstein’s work, as well as the work of other distinguished physicists in the field.  Taken as a whole, the book is focused on the interplay between mathematical concepts and physical ideas throughout history by studying today’s scientific world and how it continues to redefine physics in the 21st century.