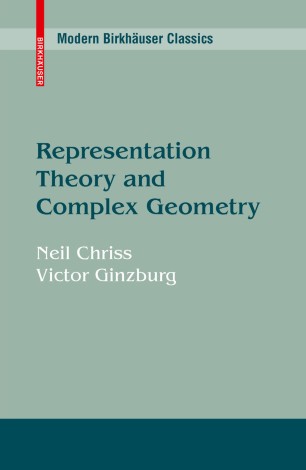 This classic monograph provides an overview of modern advances in representation theory from a geometric standpoint. A geometrically-oriented treatment of the subject is very timely and has long been desired, especially since the discovery of D-modules in the early 1980s and the quiver approach to quantum groups in the early 1990s. The techniques developed are quite general and can be successfully applied to other areas such as quantum groups, affine Lie groups, and quantum field theory. The first half of the book fills the gap between the standard knowledge of a beginner in Lie theory and the much wider background needed by the working mathematician.

The book is largely self-contained. . . . There is a nice introduction to symplectic geometry and a charming exposition of equivariant K-theory. Both are enlivened by examples related to groups. . . . An attractive feature is the attempt to convey some informal 'wisdom' rather than only the precise definitions. As a number of results is due to the authors, one finds some of the original excitement. This is the only available introduction to geometric representation theory. . . it has already proved successful in introducing a new generation to the subject.

--- Bulletin of the American Mathematical Society

The authors have tried to help readers by adopting an informal and easily accessible style. . . . The book will provide a guide to those who wish to penetrate into subject-matter which, so far, was only accessible in difficult papers. . . . The book is quite suitable as a basis for an advanced course or a seminar, devoted to the material of one of the chapters of the book.

Represents an important and very interesting addition to the literature.