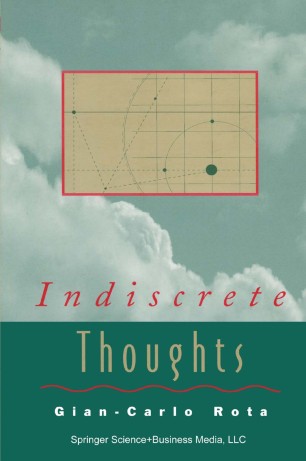 Indiscrete Thoughts gives a glimpse into a world that has seldom been described, that of science and technology as seen through the eyes of a mathematician. The era covered by this book, 1950 to 1990, was surely one of the golden ages of science as well as of the American university.

Cherished myths are debunked along the way as Gian-Carlo Rota takes pleasure in portraying, warts and all, some of the great scientific personalities of the period —Stanislav Ulam (who, together with Edward Teller, signed the patent application for the hydrogen bomb), Solomon Lefschetz (Chairman in the 1950s of the Princeton mathematics department), William Feller (one of the founders of modern probability theory), Jack Schwartz (one of the founders of computer science), and many others.

Rota is not afraid of controversy. Some readers may even consider these essays indiscreet. After the publication of the essay "The Pernicious Influence of Mathematics upon Philosophy" (reprinted six times in five languages) the author was blacklisted in analytical philosophy circles. Indiscrete Thoughts should become an instant classic and the subject of debate for decades to come.

"Read Indiscrete Thoughts for its account of the way we were and what we have become; for its sensible advice and its exuberant rhetoric."--The Mathematical Intelligencer

"It is about mathematicians, the way they think, and the world in which they live. It is 260 pages of Rota calling it like he sees it... Readers are bound to find his observations amusing if not insightful. Gian-Carlo Rota has written the sort of book that few mathematicians could write. What will appeal immediately to anyone with an interest in research mathematics are the stories he tells about the practice of modern mathematics."--MAA Reviews