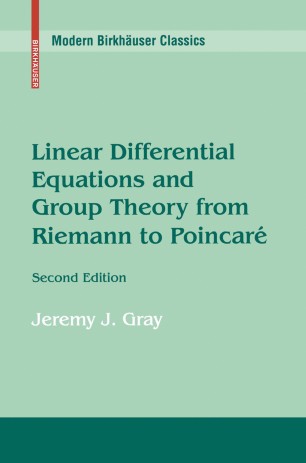 Linear Differential Equations and Group Theory from Riemann to Poincaré

This book is a study of how a particular vision of the unity of mathematics, often called geometric function theory, was created in the 19th century. The central focus is on the convergence of three mathematical topics: the hypergeometric and related linear differential equations, group theory, and on-Euclidean geometry.

The text for this second edition has been greatly expanded and revised, and the existing appendices enriched with historical accounts of the Riemann–Hilbert problem, the uniformization theorem, Picard–Vessiot theory, and the hypergeometric equation in higher dimensions. The exercises have been retained, making it possible to use the book as a companion to mathematics courses at the graduate level.

"If you want to know what mathematicians like Gauss, Euler and Dirichlet were doing...this book could be for you. It fills in many historical gaps, in a story which is largely unknown...This book is the result of work done by a serious historian of mathematics...If you are intrigued by such topics studied years ago but now largely forgotten...then read this book."--The Mathematical Gazette (on the second edition)

"One among the most interesting books on the history of mathematics... Very stimulating reading for both historians of modern mathematics and mathematicians as well."--Mathematical Reviews (on the first edition)

"The book contains an amazing wealth of material relating to the algebra, geometry, and analysis of the nineteenth century.... Written with accurate historical perspective and clear exposition, this book is truly hard to put down."--Zentralblatt fur Mathematik (review of 1st edition)