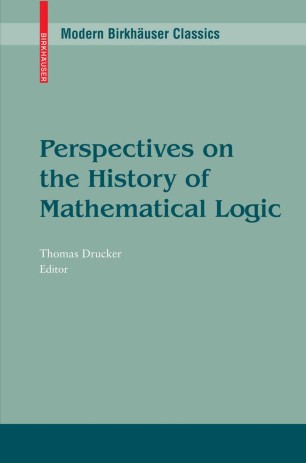 Perspectives on the History of Mathematical Logic

This volume offers insights into the development of mathematical logic over the last century. Arising from a special session of the history of logic at an American Mathematical Society meeting, the chapters explore technical innovations, the philosophical consequences of work during the period, and the historical and social context in which the logicians worked.

"…the standard of the articles in Drucker’s book is high and the book can be recommended to anyone interested in the history and development of mathematical logic this century." – Newsletter of the New Zealand Mathematical Society

"…this is an important book. It exposes the richness of ideas and viewpoints, the difficult and not always direct pathways taken in the development of mathematical logic in the last century, and the various factors which did and continue to affect that development." —Modern Logic

"Logicians with a side-interest in the development of their field will enjoy it, and will not find it taxing in either mathematical or historical detail. The human as well as the scientific side of the growth of important ideas and institutions are treated at an expansive level." —Journal of Symbolic Logic