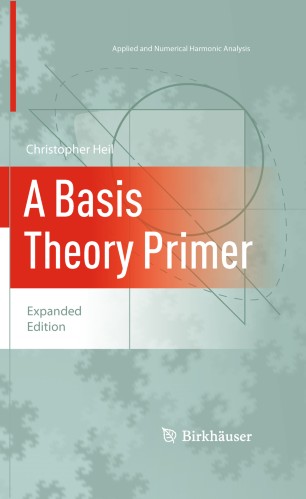 The classical subject of bases in Banach spaces has taken on a new life in the modern development of applied harmonic analysis. This textbook is a self-contained introduction to the abstract theory of bases and redundant frame expansions and its use in both applied and classical harmonic analysis.

The four parts of the text take the reader from classical functional analysis and basis theory to modern time-frequency and wavelet theory.

* Part I develops the functional analysis that underlies most of the concepts presented in the later parts of the text.

* Part IV deals with classical harmonic analysis and Fourier series, emphasizing the role played by bases, which is a different viewpoint from that taken in most discussions of Fourier series.

* Self-contained presentation with clear proofs accessible to graduate students, pure and applied mathematicians, and engineers interested in the mathematical underpinnings of applications.

* Extensive exercises complement the text and provide opportunities for learning-by-doing, making the text suitable for graduate-level courses; hints for selected exercises are included at the end of the book.

* No other text develops the ties between classical basis theory and its modern uses in applied harmonic analysis.

A Basis Theory Primer is suitable for independent study or as the basis for a graduate-level course. Instructors have several options for building a course around the text depending on the level and background of their students.

“The present book gives a wide perspective, preparing the functional analytic ground … and also discussing in great detail the relevant features of bases in Banach spaces, unconditional bases, frames, and their role in the context of Applied Harmonic Analysis. … the book is ideally suited for self-study, but also as a text book from which different courses can be compiled. The presentation is very reader-friendly and provides all necessary details.” (H. G. Feichtinger, Monatshefte für Mathematik, Vol. 166 (3-4), June, 2012)

This book is a very comprehensive work dedicated to introducing graduate students or researchers in pure and applied mathematics as well as engineering to the foundations of basis expansions and to essential techniques for applications. … The exercises contained in the book make it a good fit for graduate courses on selected topics in functional analysis and applications.” (Bernhard Bodmann, Zentralblatt MATH, Vol. 1227, 2012)

“The amount of mathematics treated in the book is impressive. … a handbook for a certain group of mathematicians to learn about the main tools of the theory of bases and frames for Banach and Hilbert spaces. … Personally I like this book. It is one of those very few mathematical books that I can read without additional difficulties arising from my limited capacity to remember facts and definitions.” (Kazaros Kazarian, Mathematical Reviews, Issue 2012 b)