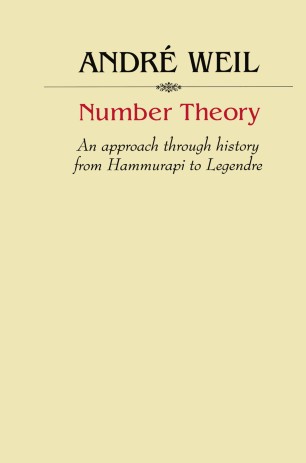 An approach through history from Hammurapi to Legendre

Number Theory or arithmetic, as some prefer to call it, is the oldest, purest, liveliest, most elementary yet sophisticated field of mathematics. It is no coincidence that the fundamental science of numbers has come to be known as the "Queen of Mathematics." Indeed some of the most complex conventions of the mathematical mind have evolved from the study of basic problems of number theory.

André Weil, one of the outstanding contributors to number theory, has written an historical exposition of this subject; his study examines texts that span roughly thirty-six centuries of arithmetical work — from an Old Babylonian tablet, datable to the time of Hammurapi to Legendre’s Essai sur la Théorie des Nombres (1798). Motivated by a desire to present the substance of his field to the educated reader, Weil employs an historical approach in the analysis of problems and evolving methods of number theory and their significance within mathematics. In the course of his study Weil accompanies the reader into the workshops of four major authors of modern number theory (Fermat, Euler, Lagrange and Legendre) and there he conducts a detailed and critical examination of their work. Enriched by a broad coverage of intellectual history, Number Theory represents a major contribution to the understanding of our cultural heritage.

A very unusual book combining thorough philological exactness, keen observation, apt comments of the essential points, picturesque fantasy, enthusiastic love of the subject, and brilliant literary style: a romantic novel of documents. It is both number theory and its history in an inseparable oneness, helping us understand the very roots and the first big stage of progress of this discipline. The author, one of the most prominent number theorists…chose to give us a broad perspective of the birth of modern number theory.--Periodica Mathematica Hungaria

The volume under review...a discursive, expository, leisurely peek over the shoulders of several great authors in number theory…is perhaps unique in the enthusiasm it has inspired. --Mathematical Reviews