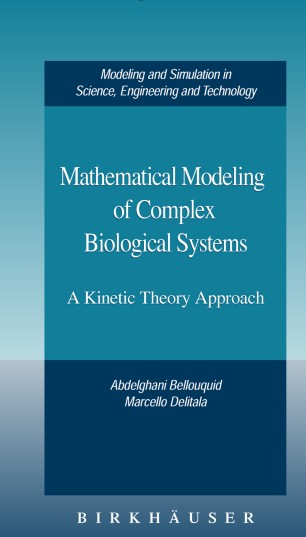 This book describes the evolution of several socio-biological systems using mathematical kinetic theory. Specifically, it deals with modeling and simulations of biological systems—comprised of large populations of interacting cells—whose dynamics follow the rules of mechanics as well as rules governed by their own ability to organize movement and biological functions. The authors propose a new biological model for the analysis of competition between cells of an aggressive host and cells of a corresponding immune system.

Because the microscopic description of a biological system is far more complex than that of a physical system of inert matter, a higher level of analysis is needed to deal with such complexity. Mathematical models using kinetic theory may represent a way to deal with such complexity, allowing for an understanding of phenomena of nonequilibrium statistical mechanics not described by the traditional macroscopic approach. The proposed models are related to the generalized Boltzmann equation and describe the population dynamics of several interacting elements (kinetic population models).

The particular models proposed by the authors are based on a framework related to a system of integro-differential equations, defining the evolution of the distribution function over the microscopic state of each element in a given system. Macroscopic information on the behavior of the system is obtained from suitable moments of the distribution function over the microscopic states of the elements involved. The book follows a classical research approach applied to modeling real systems, linking the observation of biological phenomena, collection of experimental data, modeling, and computational simulations to validate the proposed models. Qualitative analysis techniques are used to identify the prediction ability of specific models.

The book will be a valuable resource for applied mathematicians as well as researchers in the field of biological sciences. It may be used for advanced graduate courses and seminars in biological systems modeling with applications to collective social behavior, immunology, and epidemiology.