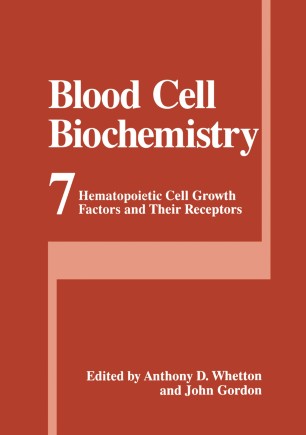 Historically, the field of hematopoietic growth factor research began with the work of Carnot and Deflandre-in 1906 they suggested that the rate of erythropoiesis is regulated by a humoral factor found in the blood, namely, erythropoietin. From this comparatively early start, accelerating progress has been made in erythropoietin research, which demon­ strates the general trends in this field of study. Erythropoietin was purified to homogeneity by 1977 (from enormous quantities of urine from aplastic anemia patients). Subsequently, the gene for erythropoietin has been cloned (1985), and massive quantities of this growth factor have been produced for clinical trials (late 1980s onward). Erythropoietin has become established as a pharmaceutical product of great value in the treatment of a number of diseases, most notably chronic renal failure. Once the ligand had been cloned, interest turned to the erythropoietin receptor, which was cloned in 1989. Since then, structure/ function studies have been performed on receptor mutants, cellular signaling events down­ stream from the occupied receptor have been identified, and the specific producer cell types and molecular stimuli for erythropoietin production have been thoroughly investigated, as has the regulation of erythropoietin gene transcription. This schedule of events since the 1970s typifies that seen for a number of hematopoietic growth factors. Along the way, the hematopoietic growth factors have been recognized as members of the cytokine family of signaling molecules that are important in a number of different physiological and patholog­ ical situations (see below).