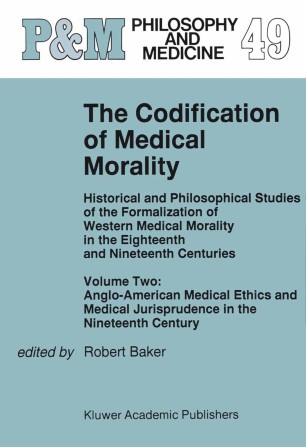 The Codification of Medical Morality

Historical and Philosophical Studies of the Formalization of Western Medical Morality in the Eighteenth and Nineteenth Centuries Volume Two: Anglo-American Medical Ethics and Medical Jurisprudence in the Nineteenth Century

Part of the Philosophy and Medicine book series (PHME, volume 49)

Like many novel ideas, the idea for this volume and its predecessor arose over lunch in the cafeteria of the old Wellcome Institute. On an atternoon in Sept- ber 1988, Dorothy and Roy Porter, and I, sketched out a plan for a set of conf- ences in which scholars from a variety of disciplines would explore the emergence of modern medical ethics in the English-speaking world: from its pre-history in the quarrels that arose as gentlemanly codes of etiquette and honor broke down under the pressure of the eighteenth-century "sick trade," to the Enlightenment ethics of John Gregory and Thomas Percival, to the American appropriation process that culminated in the American Medical Association's 1847 Code of Ethics, and to the British turn to medical jurisprudence in the 1858 Medical Act. Roy Porter formally presented our idea as a plan for two back-to-back c- ferences to the Wellcome Trust, and I presented it to the editors of the PHI- LOSOPHY AND MEDICINE series, H. Tristram Engeihardt, Jr. and Stuart Spicker. The reception from both parties was enthusiastic and so, with the financial backing of the former and a commitment to publication from the latter, Roy Porter, ably assisted by Frieda Hauser and Steven Emberton, - ganized two conferences. The first was held at the Wellcome Institute in - cember 1989; the second was sponsored by the Wellcome, but was actually held in the National Hospital, in December 1990.