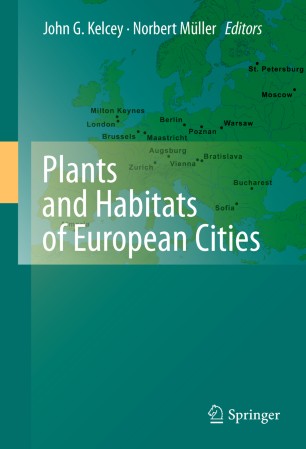 Plants and Habitats of European Cities

Plants and Habitats of European Cities contains details of sixteen cities in the European peninsula from Almeria to St. Petersburg and from Sofia to London. The chapters start with a description of the natural features and history of the cities and then consider how urbanization has affected the environment (for example, pollution, the heat island effect and climatic changes). The recorded botanical history of the city is followed by an account of the flora, which is mainly concerned with flowering plants and ferns. Where there is sufficient information the chapters include summary descriptions of the algae, bryophytes, lichens and fungi. The plant communities and species composition of the major natural and semi-natural habitats are described and followed by accounts of the species found in more typical urban habitats. These include housing areas of different types and densities, industrial zones, unused and previously developed land, parks, cemeteries, allotments and similar habitats, transport routes (for example railway land and road verges) and various aquatic habitats including rivers and flooded mineral workings. Plants and Habitats of European Cities is another important step towards the full understanding of the natural history of European cities. It is unique in describing, for the first time in a single volume, the flora and plant communities that occur in some of the major European cities. The authors are leading experts on urban botany and of the flora of the cities about which they have written. The book has been written and edited to be accessible to a wide range of interests and expertise including academic botanists and ecologists, landscape architects, planners, urban designers, ordinary people with an interest in natural history in general and botany in particular, undergraduates and other students not only in Europe but throughout the world. About the Editors: John G. Kelcey is not an academic but a practitioner. After graduating in Botany and Geology from the University of Manchester, Britain, he was appointed the ecologist of Milton Keynes Development Corporation a new town for 250,000 people, which was promoted by the British Government. Subsequently he became an ecological consultant and advisor and carried out ecological assessments of major development projects including housing schemes, commercial and retail developments, mainly in urban areas. During this time he was a member of nine professional institutions and several learned societies in Europe. Norbert Müller is a vegetation ecologist and Professor in the University of Applied Sciences Erfurt, Germany, holding the chair of the Department Landscape Management and Restoration Ecology. Within his main research fields, urban biodiversity and conservation biology, he studied flora and vegetation of several large cities in Asia, Europe, North America and South Africa. He is responsible for URBIO - a worldwide scientific network with the aim of promoting urban biodiversity through a continuing dialogue with the Convention on Biological Diversity.