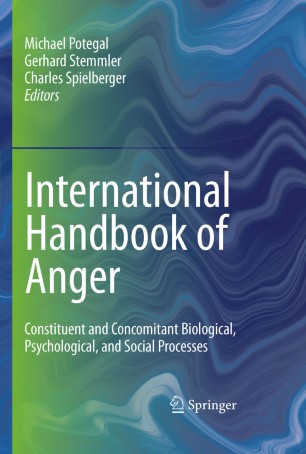 From the individual rage-driven violence of domestic abuse to the destructive causes and lasting consequences of large scale ethnic and political conflict, anger and its effects are ubiquitous in human life, and are the focus of intense study across many scientific disciplines: fields as varied as affective neuroscience, health science, psychology, psychophysiology, and sociology have all contributed to recent advances in the understanding of anger. The editors of the International Handbook of Anger bring these major contributions together for a unique portrayal of the many aspects of anger—evolutionary and biological bases, behavioral processes and effects, physiological concomitants, clinical aspects, and role in the larger social picture—with coverage that is both wide-ranging and integrative. State-of-the-art findings by highly regarded experts are organized for maximum utility, with extensive cross-referencing between chapters and editors’ introductory commentary linking the book’s sections.

A sampling of the coverage in the Handbook:

The International Handbook of Anger presents a wealth of deep and detailed knowledge relevant to clinical and health psychology, social work, family studies, and anger management, among other fields. Its depth and breadth of coverage will make it a definitive volume informing research and practice in the years ahead.

Michael Potegal, Ph.D., L.P. is Associate Professor of Pediatrics and Neurology at the University of Minnesota Medical School. He received his Ph.D. in Physiological Psychology from MIT in 1969 and held Postdoctoral Fellowships in neurophysiology at the Columbia University College of Physicians and Surgeons and the University of Amsterdam (the Netherlands). Prior positions include Research Scientist at the N.Y. State Psychiatric Institute and NRC Senior Resident Research Associate in the Walter Reed Army Institute of Research. Prof. Potegal has served as Program Chair (1986) and host (2006) of the biennial meetings of International Society for Research on Aggression (ISRA), as ISRA’s representative at the U.N., as ISRA Council member, and as Chair of the Young Investigators Program.

In 1993, Prof. Potegal integrated research and clinical interests by clinical training as a Pediatric Neuropsychologist, first at the University of Wisconsin and then at the University of Minnesota. He has received numerous university, foundation, federal and international grant awards, has participated in NICHHD review groups, and has published 75 papers and edited three books. After early studies on egocentric localization and vestibulo-spatial functions of the caudate nucleus, his research has focused on the time course and neural mechanisms of anger and aggression, most recently in children’s tantrums. Recurrent themes in Prof. Potegal’s research include the internal mechanisms that drive external aggressive behaviors and the cross species similarity of these mechanisms in humans and other animals.

Gerhard Stemmler, Ph.D. earned his degree in 1984 at the University of Hamburg. After professorships at the University of Freiburg, he became full professor of Personality Psychology at University of Marburg (Germany) in 1994. Prof Stemmler has served as Dean of the Faculty of Psychology (1995-1996, 2004-2006), President of the German Psychophysiological Society (1996-1997) and Speaker of the Section for Personality Psychology and Psychological Assessment in the German Society of Psychology (2002-2004). His studies of the psychobiology of emotion and personality have identified physiological influences on self-reported experiences and observed behaviors using approaches involving genetic polymorphisms, somatovisceral psychophysiology, and EEG characteristics. In the emotion domain, his work addresses psychophysiological specificity (e.g., anger vs. fear; expectancy-wanting vs. warmth-liking) and strategies of emotion regulation. He has also done work on conflicts in motivational behavior tendencies. Within the personality domain, Prof Stemmler’s recent research addresses agentic extraversion and the effects of dopaminergic neurotransmission on behavior facilitation, positive emotionality, and working memory.

Charles D. Spielberger, Ph.D., ABPP is Distinguished Research Professor of Psychology and Director of the Center for Research in Behavioral Medicine and Health Psychology at the University of South Florida, where he has been on faculty since 1972. He previously directed the USF Doctoral Program in Clinical Psychology, and was a tenured faculty member at Duke (1955-62), Vanderbilt (1963-66), and Florida State University (1967-72). Prof Spielberger is author, co-author or editor of more than 400 professional publications, including 6 books on the theory and evaluation of anxiety in sports, education and across cultures. His State-Trait Anger EXpression Inventory (1988, 1999) is widely used while his State-Trait Anxiety Inventory (1970, 1983) is a standard international measure with translations in 72 languages and dialects. He is also author of anxiety inventories and surveys for children, tests, and job stress. His research contributions have been recognized in awards from the American Psychological Association (1993), the APA Divisions of Clinical, Community, and International Psychology, the Florida Psychological Association (1977, 1988), the Society for Personality Assessment (1990), and the Lifetime Achievement Award of the International STress and Anxiety Research Society (STAR, 1998). Prof. Spielberger served as president of the American Psychological Association (1991-1992), the International Assoc. of Applied Psychology (1998-2002), and the International Stress Management Assoc. (1992-2000), as well as six other professional psychology organizations and four APA Divisions. He has chaired the National Council of Scientific Society Presidents (1996-97) and the International Psychology Committee of the National Academy of Science (1996-2000) as well as five APA national committees. Prof. Spielbergers’s current research focuses on: curiosity, anxiety, depression, and the experience, expression and control of anger; job stress and stress management; and the effects of stress, emotions and lifestyle factors on the etiology and progression of hypertension, cardiovascular disorders and cancer.

“The editors of this large, lengthy, and (for the most part) lively book … have done an excellent job of drawing together respected scholar­–researchers in different areas of psychology and related disciplines (e.g., sociology, political science) to present contemporary perspectives on this dynamic and influential emotion. … There are 32 chapters, each of which has an abstract to orient the reader. … References are helpfully placed at the end of chapters … . Researchers, teachers, and students of emotion should certainly read this book.” (Dana S. Dunn, PsycCRITIQUES, Vol. 55 (39), September, 2010)

“The purpose of the handbook is to ‘review state-of-the-art research on anger across a number of academic disciplines, including affective neuroscience, business administration, epidemiology, health science, linguistics, political science, psychology, psychophysiology, and sociology.’ … The International Handbook of Anger is a tour de force for the academic community and advanced readers seeking to stay current with research findings and trends across multiple disciplines. … is a vital contribution and seminal text that I anticipate will educate, inform, and stimulate thinking for years to come.” (James K. Luiselli, Journal of Child and Family Studies, Vol. 20, 2011)