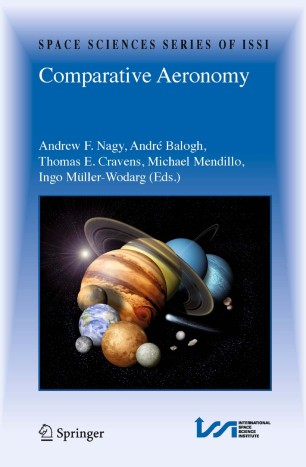 This volume provides eleven reviews by leading researchers in the fields of planetary science, aeronomy, and atmospheric science. Together they present the result of comparative studies of processes and systems aspects that control the general behaviour and structure of the upper atmospheres, ionospheres and exospheres of solar system bodies (terrestrial planets, giant planets, and their moons). Similarities and differences of the relevant physical processes, chemistry, and dynamics affecting the aeronomy of solar system bodies are reviewed and documented. Implications for the long-term evolution of atmospheres and exoplanets are examined as well. The reviews are based on significant new observations by several key scientific spacecraft at Venus, Mars, Jupiter, Saturn and Titan.

Like all volumes in the SSSI series, this book presents a state-of-the art review written for any researcher or graduate student who needs a thorough update on a modern topic in space science. In this case: the chemistry and physics of the upper parts of planetary atmospheres.