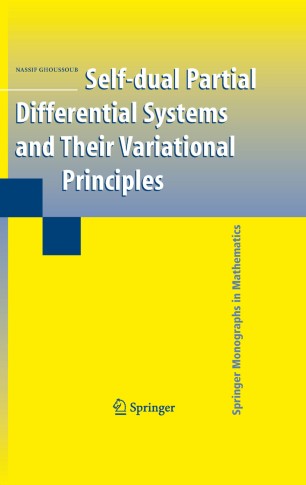 Based on recent research by the author and his graduate students, this text describes novel variational formulations and resolutions of a large class of partial differential equations and evolutions, many of which are not amenable to the methods of the classical calculus of variations. While it contains many new results, the general and unifying framework of the approach, its versatility in solving a disparate set of equations, and its reliance on basic functional analytic principles, makes it suitable for an intermediate level graduate course. The applications, however, require a fair knowledge of classical analysis and PDEs which is needed to make judicious choices of function spaces where the self-dual variational principles need to be applied. It is the author's hope that this material will become standard for all graduate students interested in convexity methods for PDEs.

Nassif Ghoussoub is a Distinguished University Professor at the University of British Columbia. He was editor-in-chief of the Canadian Journal of Mathematics for the period 1993-2003, and has served on the editorial board of various international journals. He is the founding director of the Pacific Institute for the Mathematical Sciences (PIMS), and a co-founder of the MITACS Network of Centres of Excellence. He is also the founder and scientific director of the Banff International Research Station (BIRS). He is the recipient of many awards, including the Coxeter-James, and the Jeffrey-Williams prizes. He was elected Fellow of the Royal Society of Canada in 1993, and was the recipient of a Doctorat Honoris Causa from the Universite Paris-Dauphine in 2004.