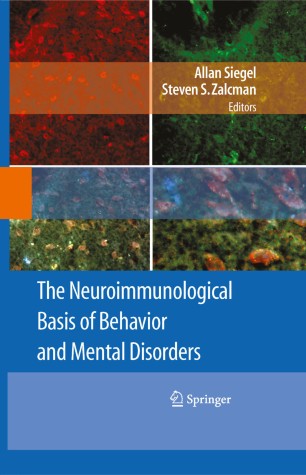 The Neuroimmunological Basis of Behavior and Mental Disorders

Over the past three decades, the neuroscience community has seen the rapid growth of neuroimmunology, a new area of research investigating how immune activation and immune-derived products interact with the brain and modulate behavior. A convergence of multidisciplinary investigators helped launch this field by developing several groundbreaking lines of research, including the characterization of neuroimmune feedback loops, development of an understanding of sickness behavior, the role of cytokines in modulating normal and abnormal neurochemical and behavioral functions, clinical studies linking mental disorders with alterations in immune function, and  identification of the molecular substrates governing the neuroimmunological basis of behavior and mental disorders. The Neuroimmunological Basis of Behavior and Mental Disorders includes contributions from outstanding scientists, and clinicians who have made major contributions to one or more of the subsets of this rapidly developing field. This book will be of particular interest and use to scientists, clinicians, students, educators, and workers in the field of neuroscience and related disciplines involving the study of normal and abnormal behavior.

Allan Siegel, Ph.D., was awarded his doctorate from the State University of New York at Buffalo in 1966 and was trained in the fields of Neurophysiology, Neuroanatomy and Behavioral Neuroscience at Yale University School of Medicine. He is Professor of Neurology and Neuroscience and Psychiatry at New Jersey Medical School's University of Medicine and Dentistry in Newark, New Jersey. His research focuses on the anatomical substrates and neurochemical mechanisms, including the functions of cytokines, governing aggression, and rage behavior.

Steven S. Zalcman, Ph.D., was awarded his doctorate from Carleton University, Ottawa, Canada in 1990, and was a postdoctoral fellow at the Manitoba Institute of Cell Biology, University of Manitoba Medical School. He received training in Behavioral Neuroscience, Neurochemistry, Anatomy, and Immunology. He held a faculty position in the Department of Psychology, Concordia University, Montreal, Canada, and is presently Associate Professor of Psychiatry at New Jersey Medical School's University of Medicine and Dentistry in Newark, New Jersey. His research focuses on neurochemical, neuropharmacological, and behavioral consequences of immune activation and cytokine treatment.