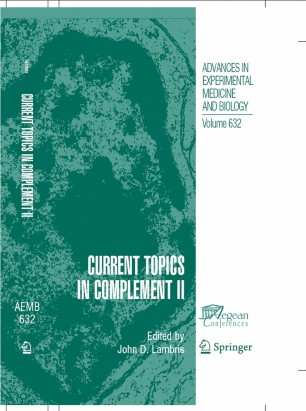 Part of the Advances in Experimental Medicine and Biology book series (AEMB, volume 632)

Complement has long been regarded as a pivotal effector arm of the innate immune response, eliciting important immunoregulatory functions in the context of inflammation and also serving as a vital link between the innate and adaptive immune response. In the post-genomic era, our knowledge of the innate immune system is enriched by findings that point to novel functions that do not strictly correlate with immunological defense and surveillance, immune modulation or Inflammation. Several studies indicate that complement proteins exert functions that are either more complex than previously thought, or go well beyond the innate immune character of the system. The advent of high-throughput platforms for genome and proteome-wide profiling, together with the enormous amount of raw genetic information that has accumulated in the databases, have stirred new expectations in biomedical research. They have led complementologists to revisit established biological systems, such as the complement system, from a global and integrative perspective. Complement research is now faced with the challenge of trying to integrate isolated biochemical pathways into complex gene and protein regulatory circuits.

In this respect, scientists from around the world convened at the Fourth Aegean Conferences Workshop on Complement Associated Diseases, Animal Models, and Therapeutics (June 10-15, 2007), to discuss recent advances in this fast evolving field. This volume represents a collection of topics on the “novel” functions of complement, patho-physiology, protein structures, design of complement inhibitors, and complement assays discussed during the conference.