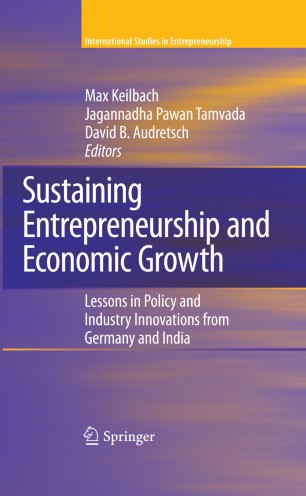 Lessons in Policy and Industry Innovations from Germany and India

Academic research on developed countries has scientifically evaluated the role of entrepreneurship on economic growth, market expansion, commercializing innovation, and reducing unemployment. In this research, it has consistently been shown that regions or industries with higher rates of entrepreneurship show higher levels of innovation and economic growth. Consequently, most European and other developed countries are realizing the potential of entrepreneurship by introducing policy measures to strengthen their entrepreneurship capital. The literature on entrepreneurship and innovation, however, has largely ignored developing countries, despite the positive results from policy initiatives and new venture investments in India, China, and elsewhere. This volume aims to bridge this gap by bringing together research by eminent scholars in Germany and India, whose in-depth analysis of entrepreneurship, innovation, and economic development in their respective countries reveals fundamental commonalities. Covering such timely issues as R&D and labor policies, demographics, and new venture financing, and including case examples from the chemical, biotech, and IT industries, the authors offer rich insights on the entrepreneurial process. The volume concludes with a discussion of the global implications for entrepreneurship research, education, investment, and policymaking.