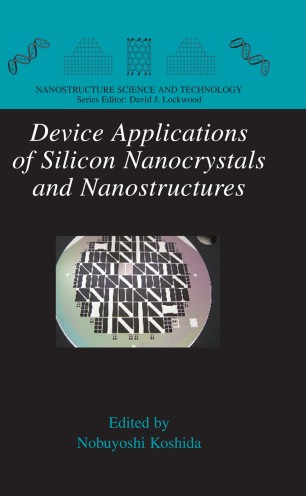 Part of the Nanostructure Science and Technology book series (NST)

Recent developments in the technology of silicon nanocrystals and silicon nanostructures, where quantum-size effects are important, are systematically described including examples of device applications. Due to the strong quantum confinement effect, the material properties are freed from the usual indirect- or direct-bandgap regime, and the optical, electrical, thermal, and chemical properties of these nanocrystalline and nanostructured semiconductors are drastically changed from those of bulk silicon. In addition to efficient visible luminescence, various other useful material functions are induced in nanocrystalline silicon and periodic silicon nanostructures. Some novel devices and applications, in fields such as photonics (electroluminescence diode, microcavity, and waveguide), electronics (single-electron device, spin transistor, nonvolatile memory, and ballistic electron emitter), acoustics, and biology, have been developed by the use of these quantum-induced functions in ways different from the conventional scaling principle for ULSI.