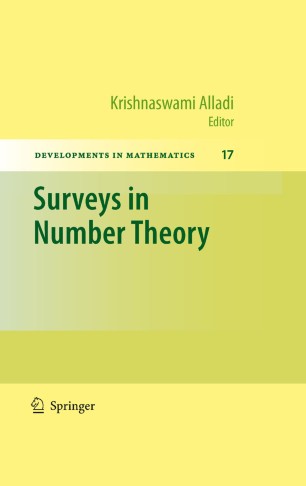 Part of the Developments in Mathematics book series (DEVM, volume 17)

Number theory has a wealth of long-standing problems, the study of which over the years has led to major developments in many areas of mathematics. This volume consists of seven significant chapters on number theory and related topics. Written by distinguished mathematicians, key topics focus on multipartitions, congruences and identities (G. Andrews), the formulas of Koshliakov and Guinand in Ramanujan's Lost Notebook (B. C. Berndt, Y. Lee, and J. Sohn), alternating sign matrices and the Weyl character formulas (D. M. Bressoud), theta functions in complex analysis (H. M. Farkas), representation functions in additive number theory (M. B. Nathanson), and mock theta functions, ranks, and Maass forms (K. Ono), and elliptic functions (M. Waldschmidt).

All of the surveys were outgrowths of featured talks given during the Special Year in Number Theory and Combinatorics at the University of Florida, Gainesville, 2004-2005, and describe major progress on a broad range of topics.

This volume is intended for mathematicians and graduate students interested in number theory and related areas.