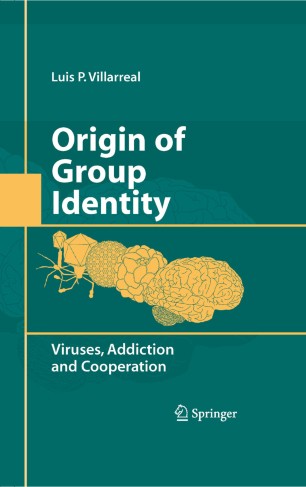 From bacteria to humans, all life has ways to recognize themselves and differentiate themselves from similar life forms. The ability to recognize similarity can be called group identity or group membership and also relates to group cooperation. Even viruses have the capacity for group identity and cooperation. However, those viruses that stably colonize bacteria can directly affect the group identity of their host. Starting with this virus-host relationship, this book traces the origin and evolution of group identity. By examining the stable, extrachromosomal viruses of bacteria, a strategy has been defined that is used for both virus persistence and group identity; this is the addiction module of phage P1. Thus, this book examines how genetic parasites and addiction modules have been involved in the origin of toxins/antitoxins modules as systems of group identity and immunity. The origin of sensory systems for light and small molecule (pheromone) detection and production, social motility, and programmed cell death are all examined. From the emergence of worms with brains, to vertebrate fish, to insects and tetrapods, olfaction and pheromones were maintained for group identity purposes and linked to addictive social bonding. In the African primates and humans, however, a great colonization by genetic parasites mostly destroyed this pheromone based system of social identity. This compelled primates to evolve enlarged social brains that used vision to learn group identity. Humans additionally evolved an even larger social brain and also developed a mind able to learned language and beliefs to specify group identity.