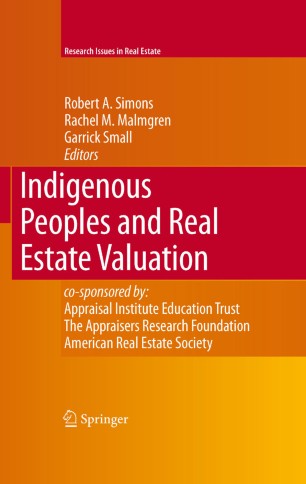 When two or more systems of property ownership or rights come together, issues and even conflicts are bound to surface. In many parts of the world, particularly in developing countries, this is becoming a larger problem, while in other parts of the world the conflicting viewpoints have long co-existed, but reparation of past conflicts has more recently become a pressing matter.

Covering contemporary practices around the world, this volume features research from an international array of authors, exploring the economic, demographic, political, legal, and cultural dimensions of property ownership—and the conflicts that emerge when systems clash. Including in-depth case studies and policy recommendations, this volume will be a valuable resource for government leaders and economic policymakers, urban planners and property developers, advocates of indigenous people’s rights, lenders, and other industry professionals.

"Indigenous Peoples and Real Estate Valuation is a great beginning for a more methodological way of understanding and being able to deal with people’s right to land. The study is important in that it clarifies that the majority of the people of the world do not adhere to the western method of land rights, thus raising the question: Who is right? Is it the indigenous people of the world or the "deeded" people of the western world? If one steps back a bit from all this and realizes that this world was created for your use and we actually leave this world with nothing, even if we owned large parcels of land, then we might realize that we need to learn from the different indigenous peoples of the world how to use this land and leave it for future generations."

Aly Karam
School of Architecture and Planning
University of the Witwatersrand

Robert A. Simons is a Professor and former director of the Master of Urban Planning, Design and Development program at the Levin College of Urban Affairs at Cleveland State University in Cleveland, Ohio. He is also the faculty advisor for the Certificate Program in Real Estate Development and Finance, offered in conjunction with the Nance College of Business at CSU. During Fall 2005, Dr. Simons was a Fulbright Scholar at Wits University in Johannesburg, South Africa. Dr. Simons received his Ph.D. from the University of North Carolina at Chapel Hill in City and Regional Planning, with an emphasis in real estate. He also holds a Master of Regional Planning and a Master of Science in Economics, both from U.N.C. His undergraduate degree in anthropology was earned at Colorado State University. He has been a member of the American Institute of Certified Planners (AICP) since 1983. At the Levin College of Urban Affairs, Dr. Simons teaches courses in real estate development, market analysis and finance, public economics Ph.D. research methods and environmental finance. Dr. Simons has published over 40 articles and book chapters on real estate, urban redevelopment, environmental damages, housing policy and brownfields redevelopment. He authored a book entitled Turning Brownfields into Greenbacks, (published by Urban Land Institute), and When Bad Things Happen to Good Property, (published by Environmental Law Institute in 2006), and is the lead editor for an international research monograph on Indigenous Property and Valuation (forthcoming in 2008, ARES). Dr. Simons has an active consulting practice, and has served as an expert witness on over 45 matters related to real estate, housing markets, and environmental contamination