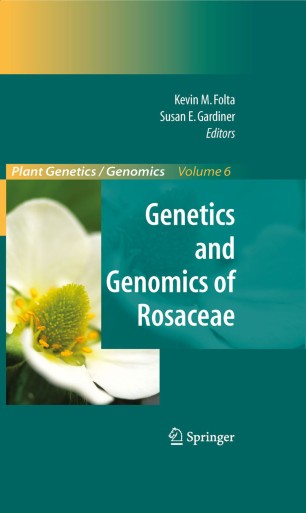 Genetics and Genomics of Rosaceae

Genomics of the Rosaceae

Plant Genetics and Genomics: Crops and Models book series provides current overviews and summaries of the state of the art in genetics and genomics for each of the important crop plants and genetic models for which such a volume does not now exist or is out of date. Volumes will focus on a single crop, species, or group of close relatives, including especially those plants that already have advanced genomic resources developed and preferably complete or advancing genome sequences.

The Rosaceae Family includes many significant fruit, nut, ornamental and wood crops. Traditionally their large stature, long juvenility periods, and often complicated genomes presented little opportunity for genetic or genomic inquiry. But the new millennium brings with it new challenges to production of the highly desirable products from this family, challenges that genetic and genomic tools may help resolve. Together necessity and scientific curiosity conspire to launch deep exploration of rosaceous crop biology. This volume originates at an acceleration point for Roscaeae genomics. A foundation of outstanding tools has been developed in a cross-section of species. The successes and failures of various approaches have been documented from model systems and inform our attack on questions within the valued crops within the Rosaceae. The text within describes the species and products of this plant family along with a synopsis of the current state of research presented from experts active on the front line of Rosaceae genomics research.

Kevin M. Folta is a native of Chicago, Illinois USA. Kevin completed his Ph.D. work in identification of blue light regulated promoter elements and post-transcriptional light-regulated mRNA stability at the University of Illinois at Chicago. Postdoctoral work at the University of Wisconsin centered on light regulated electrophysiology, gene expression and high-resolution growth monitoring. Kevin has maintained a unique research program in photomorphogenesis and a separate emphasis in strawberry genomics at the University of Florida in Gainesville, FL. He is active in public science education and has won awards for dedication to undergraduate research.

Susan E. Gardiner grew up on a sheep farm in Christchurch, New Zealand. Home schooled as a child, Sue later obtained both her undergraduate degree and PhD in Biochemistry from Otago University in Dunedin, New Zealand. Her post-doctoral period was spent in Freiburg, Germany, where she worked to elucidate the mechanism of differential regulation of the enzymes of phenylpropanoid biosynthesis in a parsley cell culture system irradiated with UV light. In 1980, Sue joined the Plant Physiology Division of the Department of Scientific and Industrial Research (DSIR) in Palmerston North, New Zealand where she first worked on the elucidation of chloroplast glycerolipid biosynthesis and later developed techniques for distinguishing varieties of pasture grasses and legumes. Sue’s work on gene mapping in apple began in 1990 at DSIR and continued when DSIR was restructured into HortResearch in 1992.  Today, Sue leads a team working to unravel the genetic architecture of traits of fruit crops central to New Zealand fruit industries. Technological advancements in Genomics at HortResearch proved to be critical in her success in identification of ‘breeder-friendly markers for traits of economic value.’  Sue has developed an extensive network of international collaborators in Rosaceae genomics, and recently completed a 2-year term as Chair of the International Rosaceae Genomics Initiative.  Sue derives her greatest satisfaction from seeing her team’s marker technologies being used by breeders.