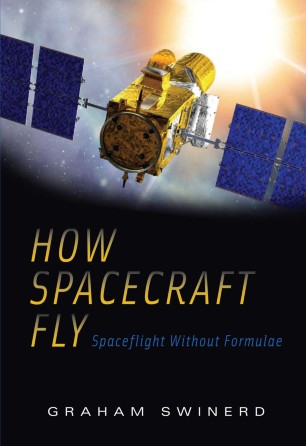 About half a century ago a small satellite, Sputnik 1, was launched. The satellite did very little other than to transmit a radio signal to announce its presence in orbit. However, this humble beginning heralded the dawn of the Space Age. Today literally thousands of robotic spacecraft have been launched, many of which have flown to far-flung regions of the Solar System carrying with them the human spirit of scientific discovery and exploration. Numerous other satellites have been launched in orbit around the Earth providing services that support our technological society on the ground.

How Spacecraft Fly: Spaceflight Without Formulae by Graham Swinerd focuses on how these spacecraft work. The book opens with a historical perspective of how we have come to understand our Solar System and the Universe. It then progresses through orbital flight, rocket science, the hostile environment within which spacecraft operate, and how they are designed. The concluding chapters give a glimpse of what the 21st century may hold in terms of human exploration of the Solar System and more futuristic propulsion technologies for interstellar travel.

Graham Swinerd invites you to understand "how spacecraft fly," while becoming a convincing rocket scientist along the way!