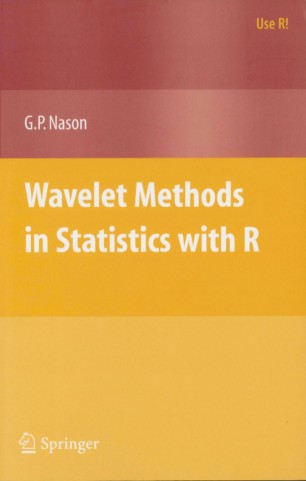 Wavelet Methods in Statistics with R

Part of the Use R! book series (USE R)

Wavelet methods have recently undergone a rapid period of development with important implications for a number of disciplines including statistics. This book has three main objectives: (i) providing an introduction to wavelets and their uses in statistics; (ii) acting as a quick and broad reference to many developments in the area; (iii) interspersing R code that enables the reader to learn the methods, to carry out their own analyses, and further develop their own ideas. The book code is designed to work with the freeware R package WaveThresh4, but the book can be read independently of R.

The book introduces the wavelet transform by starting with the simple Haar wavelet transform, and then builds to consider more general wavelets, complex-valued wavelets, non-decimated transforms, multidimensional wavelets, multiple wavelets, wavelet packets, boundary handling, and initialization. Later chapters consider a variety of wavelet-based nonparametric regression methods for different noise models and designs including density estimation, hazard rate estimation, and inverse problems; the use of wavelets for stationary and non-stationary time series analysis; and how wavelets might be used for variance estimation and intensity estimation for non-Gaussian sequences.

The book is aimed both at Masters/Ph.D. students in a numerate discipline (such as statistics, mathematics, economics, engineering, computer science, and physics) and postdoctoral researchers/users interested in statistical wavelet methods.

Guy Nason is Professor of Statistics at the University of Bristol. He has been actively involved in the development of various wavelet methods in statistics since 1993. He was awarded the Royal Statistical Society’s 2001 Guy Medal in Bronze for work on wavelets in statistics. He was the author of the first, free, generally available wavelet package for statistical purposes in S and R (WaveThresh2).