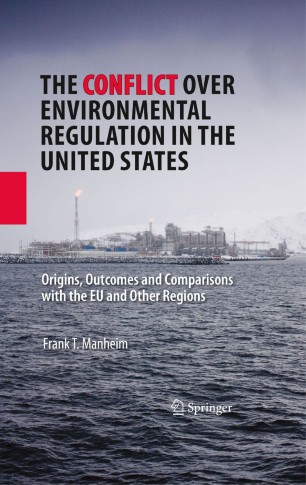 The Conflict Over Environmental Regulation in the United States

Origins, Outcomes, and Comparisons With the EU and Other Regions

The crisis of the Santa Barbara offshore oil spill in 1969 led to the passage of radically new environmental laws that made the United States an international leader in environmental protection at the time. Since then, environmental regulation has proved detrimental to both industrial and environmental performance. It contributed to a deepening confrontation between environmental and industrial groups, a rift which spread to other areas of politics and society. This book traces the origin of the current conflict and carefully analyzes current environmental and resource policy. Other advanced nations, especially in the EU, evolved more sophisticated and cooperative policies. These have led to high environmental quality and have permitted the EU to lead in global reduction of greenhouse gas emissions. Moreover, the environmental regulatory policies have fostered robust industrial and fiscal performance. Americans know something has gone wrong in the U.S. The book's candid comparison of U.S. and EU policies yields fresh perspectives on sources of U.S. dilemmas in energy policy, Congressional lawmaking, and other areas of concern.

"Managing the environment has become an issue of such bitter partisanship in the U.S. that the prospects for further progress may seem bleak. Frank Manheim's detailed, even-handed, and historically grounded analysis offers a generous counterpoint to today's rancorous environmental politics. His book challenges Americans to look beyond domestic gridlock, and regain perspective by taking advantage of EU experience and building a sense of mission around the interlocking goals of climate stabilization, energy independence, and economic vitality."

Frank T. Manheim is an affiliate professor in the School of Public Policy, George Mason University. In course of more than 30 years as a federal government ocean and earth scientist he served on numerous interagency and scientific advisory panels including the National Academy of Science--National Research Council, National Science Foundation, U.S. Environmental Protection Agency, Bureau of Land Management and Minerals Management Service, and industry associations. Manheim has cooperated with European, Russian, and Japanese scientists and agencies and is a recipient of the Swedish Academy of Science Pettersson Medal for Excellence in Ocean Research. He is an author of 190 published articles and has edited or co-edited five books.