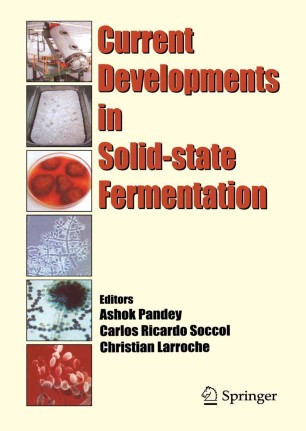 Over the period of last two decades, there has been significant resurgence in solid-state fermentation due to the numerous benefits it offers, especially in the engineering and environmental aspects. SSF has shown much promise in the development of several bioprocesses and products. This resurgence gained further momentum during the last 5-6 years with the developments in fundamental and applied aspects. A good deal of information has been generated in published literature and patented information. Several commercial ventures have come up based on SSF in different parts of the world.

The contents are organized into four parts: Part 1 deals with the General and Fundamentals aspects of SSF; Part 2 deals with the production of bulk chemicals and products such as enzymes, organic acids, spores and mushrooms in SSF; Part 3 is on the use of SSF for specialty chemicals such as gibberellic acid, antibiotics and other pharmaceutically valuable secondary metabolites, pigments, and aroma compounds; Part 4 deals with the use of SSF miscellaneous application such as SSF for food and feed applications, agro-industrial residues as substrates in SSF and the production of silage and vermicompost.