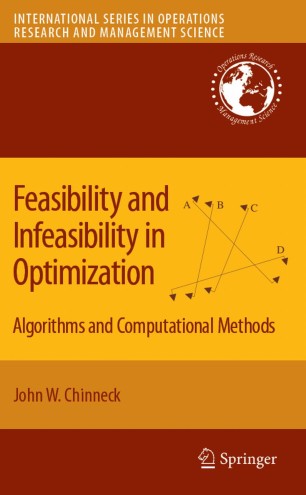 Constrained optimization models are core tools in business, science, government, and the military with applications including airline scheduling, control of petroleum refining operations, investment decisions, and many others. Constrained optimization models have grown immensely in scale and complexity in recent years as inexpensive computing power has become widely available. Models now frequently have many complicated interacting constraints, giving rise to a host of issues related to feasibility and infeasibility. For example, it is sometimes difficult to find any feasible point at all for a large model, or even to accurately determine if one exists, e.g. for nonlinear models. If the model is feasible, how quickly can a solution be found? If the model is infeasible, how can the cause be isolated and diagnosed? Can a repair to restore feasibility be carried out automatically? Researchers have developed numerous algorithms and computational methods in recent years to address such issues, with a number of surprising spin-off applications in fields such as artificial intelligence and computational biology. Over the same time period, related approaches and techniques relating to feasibility and infeasibility of constrained problems have arisen in the constraint programming community.

Feasibility and Infeasibility in Optimization is a timely expository book that summarizes the state of the art in both classical and recent algorithms related to feasibility and infeasibility in optimization, with a focus on practical methods. All model forms are covered, including linear, nonlinear, and mixed-integer programs. Connections to related work in constraint programming are shown. Part I of the book addresses algorithms for seeking feasibility quickly, including new methods for the difficult cases of nonlinear and mixed-integer programs. Part II provides algorithms for analyzing infeasibility by isolating minimal infeasible (or maximum feasible) subsets of constraints, or by finding the best repair for the infeasibility. Infeasibility analysis algorithms have arisen primarily over the last two decades, and the book covers these in depth and detail. Part III describes applications in numerous areas outside of direct infeasibility analysis such as finding decision trees for data classification, analyzing protein folding, radiation treatment planning, automated test assembly, etc.

A main goal of the book is to impart an understanding of the methods so that practitioners can make immediate use of existing algorithms and software, and so that researchers can extend the state of the art and find new applications. The book is of interest to researchers, students, and practitioners across the applied sciences who are working on optimization problems.

"This book is really the first monograph to summarize the growing body of research on the analysis of feasibility and infeasibility of optimization problems. With up to date coverage and very thorough bibliography, it will be of definite interest to researchers working in this area. The book may also be of interest to those readers who are more interested in modeling and applications but want to learn something about techniques for analyzing the feasibility of optimization models." (Brian Borchers, MathDL, March, 2008)