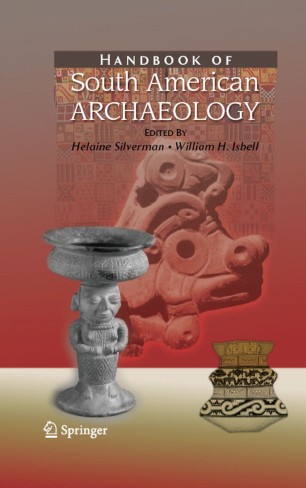 The Handbook of South American Archaeology

The contributions of this seminal handbook have been commissioned from leading local and global authorities on South America. Authors present the dynamic evolutionary processes of the ancient societies and principal geographical regions of the continent and consider issues such as environmental setting and ecological adaptations, social equality/inequality, identity formation, long-distance/intercultural interaction, religious systems and their material manifestations, ideological orientations, and political and economic organization as these developed over time.

The volume is organized thematically to promote and facilitate geographical comparisons, notably between the Andes and greater Amazonia. The bibliography section of each chapter is a valuable research tool in itself for readers wishing to delve deeper into the particular topics under consideration. Of particular merit and originality is the final section dealing with the ethics and practice of archaeology in South America today with each contribution written by a local scholar.

This edited work presents long-term research results while simultaneously highlighting the most exciting new research and greatest archaeological problems recently resolved or still awaiting solution. Chapters are written in accessible language and each contribution includes maps and many other figures and photographs to illustrate the text.

Handbook of South American Archaeology belongs on the bookshelf of every archaeologists working or living in South American but also will be of interest to those who study larger anthropological issues - such as cultural adaptation and state formation - in the prehistoric and historic periods.