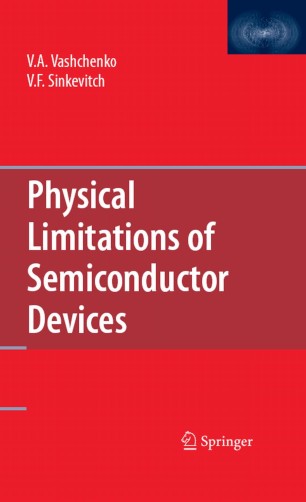 Physical Limitations of Semiconductor Devices provides an in depth understanding of the phenomena and regularities that play a critical role in the limitation of semiconductor device capabilities. It discusses how thermo-electrical breakdown, conductivity modulation, and electrical and spatial current instability phenomena affect the limitations of the devices. The authors give examples of the phenomena ranging from elementary semiconductor diode structures to discrete power and integrated components. They also show circuits both for silicon and compound semiconductor devices.

The material covers different levels of complexity including phenomenological, analytical, and numerical simulation. The material also explores the most complex phenomena of current filamentation and the impact of local structure defects, physical safe operating area limitations, and various scenarios of catastrophic failures in semiconductor devices. The emphasis of the book is on the physical approach to reliability assurance, safe operating area, and ESD problems.

Physical Limitations of Semiconductor Devices provides an important link between the theoretical aspects of the physics of semiconductor devices, non-linear physics, and the practical applications of microelectronics.