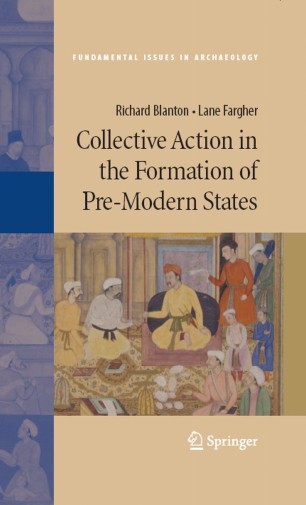 Collective Action in the Formation of Pre-Modern States

Part of the Fundamental Issues in Archaeology book series (FIAR)

Collective Action in the Formation of Pre-Modern States
by Richard Blanton and Lane Fargher
Purdue University, West Lafayette, IN

Research over the past half-century has substantially increased the quantity and quality of information on the evolution of early complex societies.  New methods and new discoveries have inspired anthropological archaeologists and other social scientists to rethink prevailing theories, which now seem excessively deterministic and unable to account for the role of human action in social change.  The authors propose that the rational choice theory of collective action, especially as it has been developed by political scientists, is a fruitful new direction for theory-building that can overcome these limitations.  This theory addresses the dilemma faced by any group attempting to build a complex society, namely, that the rational and self-interested behavior of social actors may limit the potential for collective action and group solidarity.
This book explores a collective action perspective on the formation of pre-modern states, but does not only promote a new mode of theoretical understanding.  Rather, it subjects collective action theory to a methodologically rigorous evaluation using a systematic cross-cultural analysis of historical, ethnographic, and archaeological data drawn from a world-wide sample of societies. These data provide strong support for the theory while pointing the way to a more complex and nuanced approach to collective action, uniting theories of pre-modern and modern states.