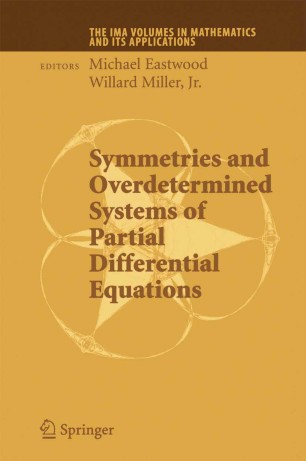 Part of the The IMA Volumes in Mathematics and its Applications book series (IMA, volume 144)

Symmetries in various forms pervade mathematics and physics. Globally, there are the symmetries of a homogenous space induced by the action of a Lie group. Locally, there are the infinitesimal symmetries induced by differential operators, including not only those of first order but of higher order too. This three-week summer program considered the symmetries preserving various natural geometric structures. Often these structures are themselves derived from partial differential equations whilst their symmetries turn out to be contrained by overdetermined systems. This leads to further topics including separation of variables, conserved quantities, superintegrability, parabolic geometry, represantation theory, the Bernstein-Gelfand-Gelfand complex, finite element schemes, exterior differential systems and moving frames.

There are two parts to the Proceedings. The articles in the first part are expository but all contain significant new material. The articles in the second part are concerned with original research. All articles were thoroughly refereed and the range of interrelated work ensures that this will be an extremely useful collection.

These Proceedings are dedicated to the memory of Thomas P. Branson who played a leading role in the conception and organization of this Summer Program but did not live to see its realization.