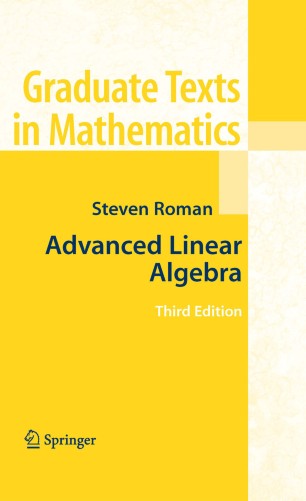 For the third edition, the author has added a new chapter on associative algebras that includes the well known characterizations of the finite-dimensional division algebras over the real field (a theorem of Frobenius) and over a finite field (Wedderburn's theorem); polished and refined some arguments (such as the discussion of reflexivity, the rational canonical form, best approximations and the definitions of tensor products); upgraded some proofs that were originally done only for finite-dimensional/rank cases; added new theorems, including the spectral mapping theorem; considerably expanded the reference section with over a hundred references to books on linear algebra.

"In this 2nd edition, the author has rewritten the entire book and has added more than 100 pages of new materials....As in the previous edition, the text is well written and gives a thorough discussion of many topics of linear algebra and related fields...the exercises are rewritten and expanded....Overall, I found the book a very useful one....It is a suitable choice as a graduate text or as a reference book."

"This is a formidable volume, a compendium of linear algebra theory, classical and modern... The development of the subject is elegant...The proofs are neat...The exercise sets are good, with occasional hints given for the solution of trickier problems...It represents linear algebra and does so comprehensively."