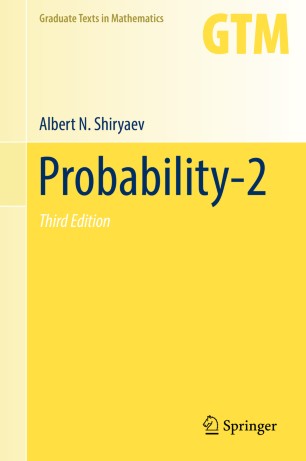 This textbook is the second volume of a pair that presents the latest English edition of the author’s classic, Probability. Building on the foundations established in the preceding Probability-1, this volume guides the reader on to the theory of random processes. The new edition includes expanded material on financial mathematics and financial engineering; new problems, exercises, and proofs throughout; and a Historical Review charting the development of the mathematical theory of probability. Suitable for an advanced undergraduate or beginning graduate student with a course in probability theory, this volume forms the natural sequel to Probability-1.

Probability-2 opens with classical results related to sequences and sums of independent random variables, such as the zero–one laws, convergence of series, strong law of large numbers, and the law of the iterated logarithm. The subsequent chapters go on to develop the theory of random processes with discrete time: stationary processes, martingales, and Markov processes. The Historical Review illustrates the growth from intuitive notions of randomness in history through to modern day probability theory and theory of random processes.

Along with its companion volume, this textbook presents a systematic treatment of probability from the ground up, starting with intuitive ideas and gradually developing more sophisticated subjects, such as random walks, martingales, Markov chains, the measure-theoretic foundations of probability theory, weak convergence of probability measures, and the central limit theorem. Many examples are discussed in detail, and there are a large number of exercises throughout.