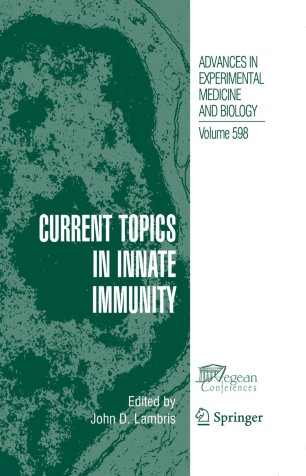 Part of the Advances in Experimental Medicine and Biology book series (AEMB, volume 598)

Innate Immunity has long been regarded as the non-specific arm of immune response, acting immediately and in a generic way, to defend the host from infections. In the post genomic era, our knowledge of the innate immune system is enriched by findings on the specificity of innate immune reactions as well as to novel functions that do not strictly correlate with immunological defense and surveillance, immune modulation or inflammation. Several studies indicate that molecules involved in innate immunity exert functions that are either more complex than previously thought, or go well beyond the innate immune character of the system.

The advent of high-throughput platforms for genome and proteome-wide profiling, together with the enormous amount of raw genetic information that has accumulated in the databases, have stirred new expectations in biomedical research. They have led scientists to revisit established biological systems from a global and integrative perspective. Innate Immunity research is now faced with the challenge of trying to integrate isolated biochemical pathways into complex gene and protein regulatory circuits. In this respect, scientists from around the world convened at the 4th International Conference on Innate Immunity (June 4 - 9, 2006), in Corfu, Greece to discuss recent advances in this fast evolving field.